It was released in both plush and virtual form on April 1, 2015.

The 10 Year Magic W Pup is here to celebrate with you! This pet’s love for Webkinz is so huge that they have their own special Happy Ten Years Wallpaper, Flooring and Bed! Plus, what’s a Webkinz birthday party without a yummy Magic W Ice Pop? 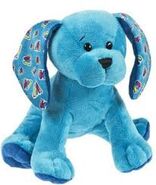 The gift box for the 10 Year Pup

Retrieved from "https://webkinz.fandom.com/wiki/10_Year_Magic_W_Pup?oldid=37232"
Community content is available under CC-BY-SA unless otherwise noted.