Webkinz Wiki
Register
Don't have an account?
Sign In
Advertisement
in: Pets, Pet of the Month, 2006 Pets,
and 2 more

HM042
The Alley Cat is a Webkinz pet that was introduced in May 2006. There is a Lil'Kinz version and was April 2009's Pet of the Month. Its pet specific food is the Spiced Salmon Strudel and its pet specific item is the Big City Window.

The Alley Cat has a white, short-haired underbelly, paws, arms, muzzle and spot on the middle of their face. Their back, ears, head, tail and legs are long-haired and gold in colour with thick orange and thin black stripes. They have pink inner ears, a pink triangular nose, and small black eyebrows. They have heterochromia, making their right eye blue and their left eye green. They also have white whiskers, and their Magic W is located on their right paw.

"It's time to let the cat out of the bag; the alley cat is here! This clever kitty has given up city life and moved to KinzVille for good. What is this cat's idea of purr-fection? An awesome room, delicious food, and (of course) a warm place to curl up for a nap!"

How to draw an Alley Cat

An Alley Cat featured on the album cover for Where Did You Get Those Stripes? 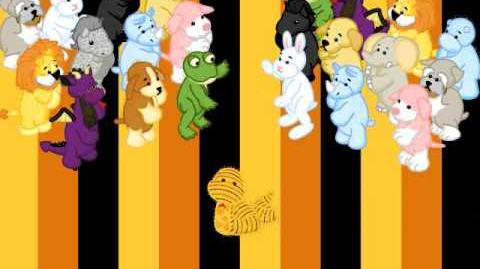