The Alpine St. Bernard is a regular Webkinz pet that was released in November 2013. It was Pet of the Month for March 2017. Its pet specific food is Frozen Chocolate Fondue and its pet specific item is the Barrel Hot Tub.

"When you're in need of a friend, look no further than the magnificent Alpine St. Bernard! This furry champion works hard saving lives in the bitter cold, so be sure to have their Barrel Hot Tub ready and steaming when they return from the mountain to help rest their muscles! And as a reward for their efforts helping others, it's a great idea to give them a Frozen Chocolate Fondue, their favorite sweet treat!"

The Alpine St. Bernard is white and is covered in fluffy fur. It has black ears and has black patches under its eyes, and has a brown head with a white stripe in the middle. It has a patch of brown on its back. The virtual pet only has fluff on its chest compared to the entire plush version being fluffy, and seems to have more brown on its face. 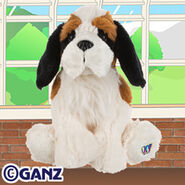