The American Buffalo was released in October 2008. It wasn't Pet of the Month, doesn't have a Lil'Kinz version and it is retired. Its special food is Green Grass Gremolata and its special item is a Roamin' The Plains Grill, which is very big.

There is also a Figurine version which is called the American Buffalo Catcher. 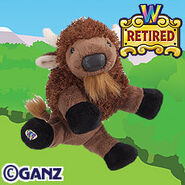 Roamin' The Plains Grill
Add a photo to this gallery

Retrieved from "https://webkinz.fandom.com/wiki/American_Buffalo?oldid=39364"
Community content is available under CC-BY-SA unless otherwise noted.