Giving, gracious, and noble - that's the American Golden, to a tee! If you really want to pamper your pet, make sure you send them on a relaxing vacation. This puppy loves to travel! 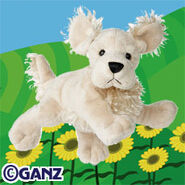 Best In Show Brownies
Add a photo to this gallery

Retrieved from "https://webkinz.fandom.com/wiki/American_Golden?oldid=39366"
Community content is available under CC-BY-SA unless otherwise noted.