Arte Fact is a Golden Retriever who is the owner and sole employee of the Curio Shop.

When first entering the Curio Shop, Arte will treat you somewhat coldly; though as you buy, tip, and come around more often, Arte will become much warmer and kind. You can read more about Arte's friendship with the player here.

Once a day, you can go into the mines (also owned by Arte) and look for gems. Once you collect them all, you have the choice of trading them all in for the Webkinz Crown of Wonder. 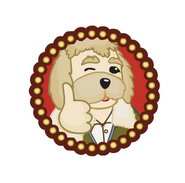 Arte at the Curio Shop
Add a photo to this gallery
Retrieved from "https://webkinz.fandom.com/wiki/Arte_Fact?oldid=40376"
Community content is available under CC-BY-SA unless otherwise noted.