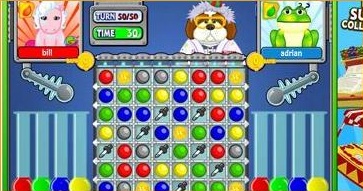 Atomicolicious is a two player game from the Tournament Arena that came out in Feburary 22, 2008 as Goober's Atomicolicious. It was known as that until early March 2008 when it changed its name to Atomicolicious. It is almost like Goober's Lab because you can get three to five in a row. You can minus three from the other player's team by using a eye drop (three to five) and you can get a KinzCash bonus by geting three to five signs in a row. There is a rainbow color that can help you get three to five in a row. There is a gray color that is unknown. Getting four in a row give you a bonus turn and getting five in a row give you a bonus turn as well as giving you an extra point called a wildcard. You have time to do this. If you don't make a move in the time, it will be the other person's turn and it will be the same thing if you didn't make a three in a row. At the end of the game, the winner gains ten KinzCash and he loser gains five KinzCash. Sometimes the loser has more KinzCash then the winner. The loser's screen will break when he or she loses as the winner's screen doesn't break. You have to get all twelves for the colors red, green, yellow, and blue before the other player does to win the game. On the May 6, 2008 Newspaper, it said hat the game may change while the middle of it if you do hard work so DON'T QUIT!

Retrieved from "https://webkinz.fandom.com/wiki/Atomicolicious?oldid=8954"
Community content is available under CC-BY-SA unless otherwise noted.