HM851
The Black & White Friesian is a Webkinz pet that was released in March 2017. It was Pet of the Month in May 2020. It doesn't have a Lil'Kinz and isn't retired. Its pet specific item is the Knights Stable, and its pet specific food is the Grandiose Griddle Cakes.

"The Black & White Friesian will surely gallop away with your heart! After a long & laborious day, this chivalrous pet settles down for a rest inside their stately Knight's Stable! When they awake, feed their appetite in a big way with some Grandiose Griddle Cakes!" 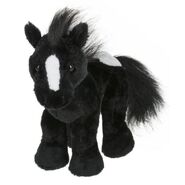