The Bulldog was released in January 2007. It has a Lil'Kinz version and was Pet of the Month in January 2009. Its pet specidic food is Bangers and Mash and its pet specific item the Fire Hydrant Fridge.

There is also a Bulldog Kinz Klip. There is a Figurine version of this pet, called the Big Catch Bulldog.

While the Bulldog might look a little tough, there's nothing rough about this friendly pup. The Bulldog has a big heart, and a great sense of humor. Tell this little doggy a couple of jokes, and you'll be fast friends. Of course, having a plate of Bulldog Bangers & Mash handy doesn't hurt, either! 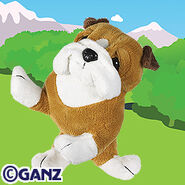 Happy Bulldog
Add a photo to this gallery

Retrieved from "https://webkinz.fandom.com/wiki/Bulldog?oldid=39479"
Community content is available under CC-BY-SA unless otherwise noted.