The Bulldog Puppy is a regular Webkinz pet that was released in April 2013. It was Pet of the Month for November 2016. Its pet specific food is the Big Game Bacon Nachos and its pet specific item is the Sports Fan Couch.

"Become a fan of the world's biggest sports fan, the Bulldog Puppy! This adorable dog likes the catch the big game from the comfort of their Sports Fan Couch! And this dog thinks a plate of Big Game Bacon Nachos makes the perfect snack!"

The Bulldog Puppy is white with large tan spots covering half of its head, on its back, and on its tail. It has a black plastic nose and eyes, and black spots on its muzzle. It has wrinkled fabric on top of its head and wrinkly ears. The virtual pet has a darker shade of tan than that on the plush. 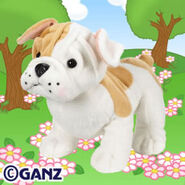