Cash Cow is an Arcade game which was released in 2005. Players click on groups of three or more same colored milk bottles so that they disappear from the screen, earning points. In early 2017 the game was updated with new graphics and changing the way the trophy is obtained. However, the old version is still available to play in the Tournament Arena as Cash Cow Battles!

Cash Cow is also available as a standalone app on iPhone and Android, purchased from the App Store or Google Play Store for .99 cents.

Cash Cow has two difficulties: normal and hard. Hard mode begins with more bottles on the screen, and more colors to match. Regardless of difficulty the game begins with a screen full of multi-colored milk bottles, with one row at the bottom gradually filling with bottles. Once this row is filled, it will be added to the main screen which pushes the existing bottles closer to the top. Alternatively, the player can click on this bottom row to add another row to the screen instantly. This can be useful if the player is aiming to eliminate large groups of bottles, but it can also be dangerous if too many rows are added quickly. The top of the screen has a meter that fills up as players click on bottles, adding cash to the cow's truck. Once this meter is full, the player advances to the next level.

Only groups of three or more bottles can be cleared from the screen. If the player clicks on a group that cannot be cleared too many times, (for example, a group of only two bottles) points will be deducted from their score. If the screen is completely cleared, then a KinzCash bonus is awarded. If the milk bottles reach the top of the screen, the game ends.

The original Cash Cow did not have a meter that measured the player's progress - instead, there were different levels of profit that matched the amount of money in the cow's truck. The levels in order were Workin' Hard, Doing Well, Makin' Money, Raking It In and Got the Big Cash. Once Got the Big Cash was highlighted, Cash Cow would drive away and move on to the next level.

Cash Cow is one of the Arcade games that can award a Trophy. The trophy was originally randomly obtained by clearing a large group of bottles, but is now awarded by clearing a group of ten or more orange bottles from the screen. 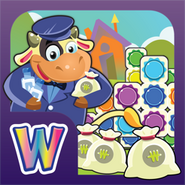 The game's icon in the App Store
Add a photo to this gallery
Retrieved from "https://webkinz.fandom.com/wiki/Cash_Cow_(game)?oldid=46477"
Community content is available under CC-BY-SA unless otherwise noted.