HM841
The Cinnamon Beagle is a Webkinz pet that was released in August 2016. It doesn't have a Lil'Kinz, it isn't retired, and hasn't been Pet of the Month. Its pet specific item is the Soothing Scented Tub and its pet specific food is the Cinnabark Bites.

Catch that scent and track down a Cinnamon Beagle for your family of Webkinz Pets! This adorable dog likes to wind down after a long day by relaxing in their Soothing Scented Spa! And you'll make snack time terrifically tasty by serving them some sweet Cinnabark Bites! 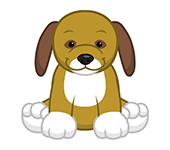