Webkinz Wiki
Register
Don't have an account?
Sign In
Advertisement
in: Pet of the Month, Pets, Regular Pets, Cats

The Cuddle Cat is a Webkinz pet that was released in March 2016. It doesn't have a Lil'Kinz version. It was Pet of the Month in September 2018. It isn't retired. Its pet specific item is the Treehouse Made for Two and its pet specific food is Piquant Cod Canapés.

The Cuddle Cat has fluffy dark gray fur. Its muzzle and paws are white. It has blue eyes with large black pupils. The insides of its ears are pink. Its nose is pink.

If you’re looking for a cute kitty to cuddle, look no further than the Cuddle Cat! This snugly feline can usually be found relaxing up in their Treehouse Made for Two! If you really want to get on their good side, make sure you feed them their favorite snack–some Piquant Cod Canapés! 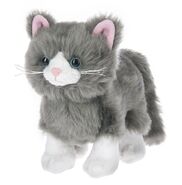 Treehouse Made for Two