"Who could be more deliciously sweet than the Cupcake Pup? This darling dog adores baking, so they will want to spent lots of time working at their Cupcake Baker's Table! And every good baker will want to enjoy their own wares, so make sure you serve them some Cupcake Pops for a snack!"

The Cupcake Pup is white and covered in a brown, pink and baby blue cupcake print with brown, pink and red sprinkles. The undersides of its ears, its paws, and tail are pink. It has black eyes and a pink stitched nose and mouth on a white muzzle. 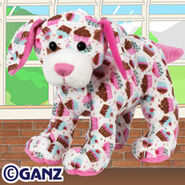