Webkinz Wiki
Register
Don't have an account?
Sign In
Advertisement
in: Dinosaurs, Pet of the Month, Pets,
and 2 more

HM621
The Darling Dino is a Webkinz pet that was released in January 2012. It doesn't have a Lil'Kinz, it isn't retired, and was Pet of the Month in November 2015. Its pet specific food is the Sparkling Sundae and its pet specific item is the Prehistoric Pond.

You'll really dig this prehistoric pet! The new Darling Dino is as pretty as a picture with its soft shades of greens and lilacs, and a silky, lavender mane tied up with an adorable pink polka dot bow. You're going to love the Darling Dino for ages and ages!

The Darling Dino is light blue with a sparkling purple belly and cheeks. It has a light purple tuft of hair on its head tied with a pink polka dot bow. It has purple and pink spots going down its back and purple paw pads. It has long eyelashes. 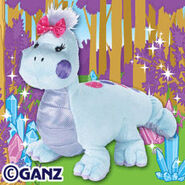