Retired
Debbie Dragon is a Webkinz Host who worked at the Travel Agency. She took Webkinz and Lil'Kinz on a vacation to either the spa or a remote island paradise (500 KinzCash). She was later removed from Webkinz, but she still can be seen as a judge in Webkinz Stadium competitions. She was also removed from the friend list on the cell phone.

In late November 2020, Debbie made an appearance in an advertisement for the migration of Webkinz World from the browser to the desktop app.

Although her page in the Kinzapedia on the Webkinz Newz site does not exist anymore, according to the Webkinz Insider Wiki, Debbie Dragon was described by Ganz as such:

"Debbie is a friendly, enthusiastic, and outgoing dragon and always knows exactly where people should take their pets on vacation. She has been a travel dragon for many, many years and is happiest when at work or on the road, scouting a new destination for pets to visit. In her time off, she writes travel articles for magazines."[1]

In an interview with Ella McWoof[2], she was inquired about her upbringing and how she came to be a travel agent.

As a kid, she was a self-described "avid reader" and some of her favorite stories featured adventures abroad. She looked up to Arte Fact, whose explorations inspired her to travel.

Her early jobs include becoming a deckhand on Captain Patches' ship, which allowed her to see all sorts of places. When Captain Patches retired, she returned to Kinzville and started her job as a travel agent.

Debbie with the Hosts 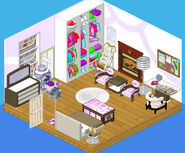 Debbie as a stadium judge 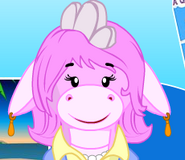 Head Shot of Debbie at her Desk