Ms. Birdy (Significant Other)
Dr. Quack is one of the original hosts of Webkinz World. He is a former doctor who ran his own clinic, Dr. Quack's Clinic, but retired after the Medical Mystery was solved.[1][2] Despite his retirement, he still makes appearances in the game Webkinz Supermodelz and in the job Dr. Quack's Assistant.

"Dr. Quincy Quack is an amazingly kind and gentle duck – he runs the clinic and sees every single sick Webkinz. He can cure any illness – he has never failed. Dr. Quack has been romantically linked to Ms. Birdy...but he won't confirm anything."

Ever since 2005, players have been given the opportunity to interact with Dr. Quack in his clinic. He listened to your pet's heart, checked their reflexes, and/or looked in their mouth or ears. He also warned players of their caretaking habits, deciphering the wrong from right. If your Webkinz was sick, Dr. Quack told you how to help, and gave you medicine to make your pet feel better.

Founding of the Clinic

For a school project, Roberta Rabbit wrote a report on the history of Dr. Quack's Clinic.[5] The information on the founding of the clinic is as follows:

After Dr. Quincy Quack graduated medical school, he decided to move to Kinzville after discovering there were no doctors in the area and that pets were traveling to the Big City for medical care. He soon made his way to Kinzville and began looking for a place to set up his new clinic. At first, he had trouble finding the perfect spot, but eventually came upon an available lot nearby the KinzPost Office and Adoption Center.

Detailed information about the founding of the clinic can be read in the full article.

On March 3, 2015, Webkinz Newz announced that because Dr. Quack found a way to cure all pets of all illnesses with help from the mad scientist Goober, he decided to retire and close his clinic's doors on March 25, 2015.[6] 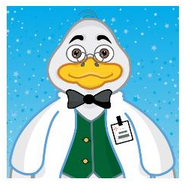 Dr. Quack's kitchen after being decorated for Christmas

Dr. Quack writing in his journal

Community content is available under CC-BY-SA unless otherwise noted.