The Emperor Dragon may be one of the bravest and wisest pets around, but their caring nature will make YOU feel like royalty! After a long day in Kinzville, this dragon likes nothing more than spreading their wings out in front of a Timeless Treasure Television. 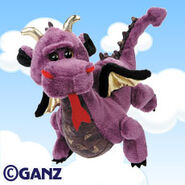 Plush Form
Add a photo to this gallery

Retrieved from "https://webkinz.fandom.com/wiki/Emperor_Dragon?oldid=49046"
Community content is available under CC-BY-SA unless otherwise noted.