The Fox Terrier is a Webkinz pet that was released in December 2013. It doesn't have a Lil'Kinz version. It has not been Pet of the Month. It isn't retired. Its pet specific item is the Windy Moors Den and its pet specific food is On the Run Bun.

The Fox Terrier is white. Its back is light gray. It has brown ears. The end of its muzzle is brown. It has bushy white eyebrows. Its eyes and nose are black.

Try and keep up with the energetic Fox Terrier! This proud athletic pup lives for the chase and loves nothing more than being outside in the brisk country air, but be sure to give them a perfect resting place, too - their own Windy Moors Den! And just so this racing pup never has to slow down, toss them a yummy On the Run Bun as they speed past you! 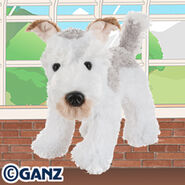 On the Run Bun