This bright puppy is sure to stand out in a crowd! Delightfully red with a gentle smile and a big heart, you'll simply fall head over heels with this vibrant pooch! 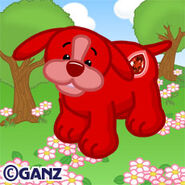