The golden fawn is a Webkinz pet, and is not retired. It is new from 2015. it is a special member only gift. Its special food is the marigold muffin and its special item is the golden canopy bed. It is not limited edition or lil' Kinz. 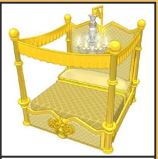 pet's food.
Add a photo to this gallery
Retrieved from "https://webkinz.fandom.com/wiki/Golden_Fawn?oldid=31786"
Community content is available under CC-BY-SA unless otherwise noted.