The golden fawn is a Webkinz pet, and is not retired. It is new from 2015. it is a special member only gift. Its special food is the Marigold Muffin  and its special item is the Golden Canopy Bed. It is not limited edition or lil' Kinz. 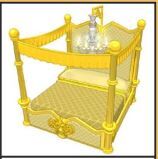