HM010
The Golden Retriever is a Webkinz pet that was introduced in May 2005. It isn't retired, was Pet of the Month in October 2009 and has a Lil'Kinz version. It was featured in the video Cats & Dogs - Why Do We Always Fight?. Its pet specific food is the Marzipan Bone and its pet specific item is the Retriever Treadmill.

Retrievers are "water" dogs so this golden puppy is sure to dog paddle its way right into your heart. This canny canine loves chewing on Marzipan bones and playing games in the Arcade. Retrieve your own "Golden" today!

The Golden Retriever is a dog that is blonde in colour, with a short-haired cream muzzle and under-ears. It has a black, triangular nose, black eyes, and small black eyebrows. It also has longer hair on its back, ears, head and tail. Their Magic W is located on their upper left paw.

Plush in a Music Starz box 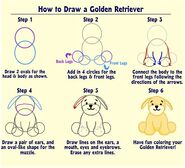 How to Draw a Golden Retriever

A Golden Retriever in a calendar. 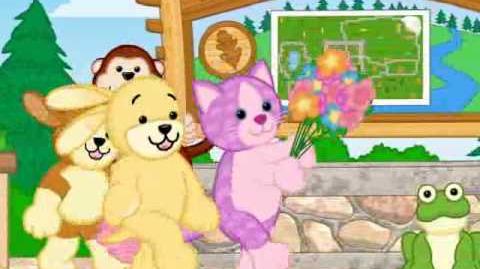 Cats & Dogs (Why Do We Always Fight?)
Their Pet of the Month Music Video
Community content is available under CC-BY-SA unless otherwise noted.
Advertisement