Gorillas are very gentle, intelligent creatures; and they also know how to have a LOT of fun! To make a gorilla your best buddy, just play some games at the Arcade and don't forget to stop by the W Shop to pick up a bowl of crunchy shoots n' roots!

The Gorilla is completely black all over. It has a big nose and small ears. Its face, paws and feet has smooth fur on it. 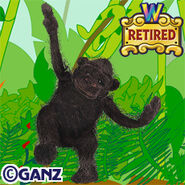