HM015
The Grey & White Cat was introduced in July 2005. It was retired on May 2007, wasn't Pet of the Month, and has a Lil'Kinz version. Its pet specific food is the Flounder Flan and its pet specific item is the Cat Trick Trampoline.

What’s better than two cats? Three, of course! This is our third Webkinz Cat, but it is sure to be first in the hearts of anyone who might adopt one. Don’t be fooled by the grey; this kitty’s personality is as multi-colorful as a rainbow! They’ll have you saying Meow for me!

This cat has a white blaze and muzzle. Its paws and chest are also white. It has a grey back and tail. The eyes are green and it has long white whiskers. Its nose and the inside of its ears are pink. 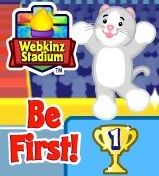 In Ads
Add a photo to this gallery
Retrieved from "https://webkinz.fandom.com/wiki/Grey_%26_White_Cat?oldid=46725"
Community content is available under CC-BY-SA unless otherwise noted.