The Webkinz Hyena came out in 2013. They have a plush. Their species is typically the spotted hyena. They are not retired nor has a Lil'Kinz.

Webkinz hyenas are colored light brown and has a doe colored fluffy "mane" on its neck. It has a brown line going down to its mouth. They have brown ears. They have dark brown spots around its body. It has a black nose and eyes and a big smile on its face. The toy is mostly the same description as the virtual online appearance. The official plush picture and the online Webkinz shows no ring around the eyes, but when bought, the plush has rings.

If you’re looking for some laughs, adopting a Hyena will certainly put a smile on your face! The hilarious Hyena is always trying out new jokes, so set them up behind their Fifteen Minutes Mic to work on their standup rountine! Laughter can also work up a rabid appetite, so make sure you feed your Hyena their favorite food– a Sub-Saharan Sandwich! 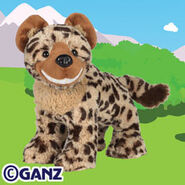 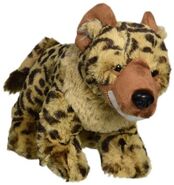 thumb|The hyena plush, showing a "ring" around the eyes.
Add a photo to this gallery
Retrieved from "https://webkinz.fandom.com/wiki/Hyena?oldid=38304"
Community content is available under CC-BY-SA unless otherwise noted.