"No one loves ice cream quite as much as the Ice Cream Pup! In fact, this lovable pet loves to eat their specially-made Chocolate Ice Cream Sandwiches so much, they have their very own Ice Cream Sandwich Maker! Become their friend and you'll never be short of fun!"

The Ice Cream Pup is white and covered in an ice cream & popsicle pattern with blue, orange, green, brown and pink. It has a white muzzle with a brown stitched nose and black eyes. It has pink ears and paws. 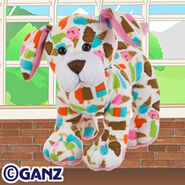