HM396
The Ice Dragon was released in December 2010. It was retired in February 2014. Its pet specific item is the Ice Tower Lookout and its pet specific food is the Mythical Milkshake.

"The cuddly Ice Dragon is one cool customer who is always on polar patrol! If you look up very high in the sky you just might catch a glimpse of this legendary lizard surveying the arctic from its Ice Tower Lookout. But when it's time for a break, the Ice Dragon is always up for a delicious Mythical Milkshake!"

The Ice Dragon is white with a shimmery silver belly, tail tip, horns and wings. The insides of its wings, ear flaps, and spikes on its back and tail are a shimmery blue. The top of its head, muzzle and back are light blue. Its eyes are bright blue with big eyelashes. 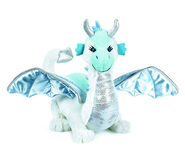