Webkinz Wiki
Register
Don't have an account?
Sign In
Advertisement
in: Dogs, Pets, Pet of the Month,
and 2 more

The Webkinz Jack Russell was released in May 2009. It doesn't have a Lil'Kinz version and isn't retired. The Jack Russell's pet specific item is the Bow Wow Bone Tree, and its pet specific food is the Double Decker Steak Cake. It was Pet of the Month in November 2010 and was featured in the music video Just Wanna Be Your Friend.

The Jack Russell has black folded ears that point downward, a black nose, and brown eyes with black irises. Their main body colour is white. They also have a large light brown spot on the left of their face that covers around a quarter of their face, surrounding their left eye and covering their left cheek. They also have a longer snout, and a short tail. On their back, they have 2 medium sized black patches on the top of their back, with one being closer to their front legs and head, and the other surrounding their white tail. Their Magic W is located on their right paw.

"This peppy pup is just filled with energy and competitive spirit! Take the Jack Russell to the Arena for some friendly challenges! After a day full of victories, this cute canine likes to rest under the shade of its beloved Bow Wow Bone Tree!" 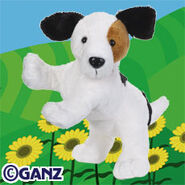 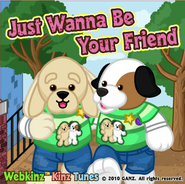 The Jack Russell featured on their Pet of the Month music video cover
Community content is available under CC-BY-SA unless otherwise noted.
Advertisement