Not to be confused with the Sock Monkey pet released in 2010.

The Knit Sock Monkey is a regular Webkinz pet that was released in February 2014. It does not have a Lil'Kinz variation, is not retired, and was Pet of the Month in April 2016. Its pet specific food are the Banana Ice Pops and its pet specific item is an outfit consisting of a Knitted Red Hat, Knitted Sock Sweater and some Knitted Socks.

In the Knit Sock Monkey's digital avatar, they have ash grey fur that looks knitted, with their tail tip, paws, and muzzle being cream in colour, as well as their forearms, calves and the top of their head also being cream coloured while having a striped look to them, resembling the opening of a sock. They have red lips, black eyes and two small black eyebrows.

In their plush form, it is more simplified, while missing the features of cream forearms and calves. They also have speckled ash grey fur that does not look knitted. Their red lips are much larger, and they wear a white toque that has a red ridge along the bottom with a red pompom on top. Their Magic W is located on the left of their rear next to their tail.

"Say hello to the happy-go-lucky Knit Sock Monkey! And what a lucky monkey they are, because they have their own personally-customized Knitted Hat and Sweater! But whether it's chilly or warm outside, you know that they'll always want their top treat: a deliciously cold Banana Ice Pop!" 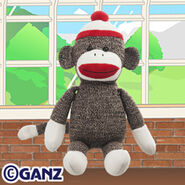 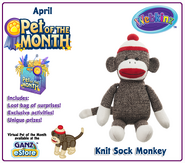 Pet of the Month Advertisement