HM463
The Webkinz Lava Dragon was released in September 2009. It was retired in October 2009, doesn't have a Lil'Kinz, and hasn't been Pet of the Month. It is the third Dragon so far that was released in Webkinz World. Its pet specific food is the Magical Magma Marshmallows and its pet specific item is the Molten Magma Bed.

Fiery, fun and full of energy - that's the Lava Dragon in a nutshell! This lovable pet is chattier than most, so make sure you take it to the clubhouse to socialize! After a day that's been jam-packed with things to do and places to go, this cuddly critter's bound to get hungry! Give it a memorable meal of Magical Magma Marshmallows! 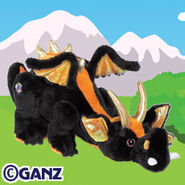 Magical Molten Marshmallows
Add a photo to this gallery
Retrieved from "https://webkinz.fandom.com/wiki/Lava_Dragon?oldid=49050"
Community content is available under CC-BY-SA unless otherwise noted.