The Leopard webkinz pet was released in January 2007. It has a Lil'Kinz version (which is retired), was Pet of the Month in September 2009 and isn't retired. It was featured in the video I Gotta Lotta Soft Spots For You. Its special food is Garlicky Gazelle Tenderloin and special item is a Wilds of the Jungle Sofa. There is a Figurine version of this pet called the Dear Diary Leopard.

This big cat is as friendly as is it is strong; if you're looking for a faithful feline friend, look no further than the loyal leopard. While this leopard definitely likes the wild life, it is also quite happy spending time in a well-decorated room, or in the arcade playing some fast, action-packed games. 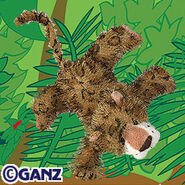 Wilds of the Jungle Sofa

Leopards
Add a photo to this gallery

Retrieved from "https://webkinz.fandom.com/wiki/Leopard?oldid=38157"
Community content is available under CC-BY-SA unless otherwise noted.