The Lil'Kinz Blue Jay is the second Lil'Kinz and the first Lil'Kinz bird to be released without a larger counterpart. The pet's adoption gifts are the True Blue Birdbath and Bright Blue Seed Drop Stew. It was released on July 25, 2008.[1]

"Bird's the word with this awesome pet! You'll never be blue with the cool Jay! The Blue Jay is friendly, exuberant, and always likes to make new pals. Watch this brilliant blue bird fly all around Webkinz World and brighten up everyone's day!"[2]

As a special promo, free Lil'Kinz Blue Jays were given out at a Toronto Blue Jays' game and Ganz threw the first pitch.[3]

On Webkinz Newz and the Webkinz site, the Blue Jay was part of the Lil Blue Jay Peek-A-Newz and "Birdwatching 101" event, where the user could click on floating Blue Jays throughout May 2018 to earn prizes for their Webkinz account.[4][5]

There is also a virtual figurine modeled after the Blue Jay called the Kite Flyer Blue Jay Figurine.

True Blue Birdbath
Add a photo to this gallery 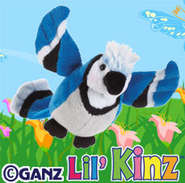 Moods
Add a photo to this gallery

Retrieved from "https://webkinz.fandom.com/wiki/Lil%27Kinz_Blue_Jay?oldid=48786"
Community content is available under CC-BY-SA unless otherwise noted.