HM006
The Lion Webkinz was released in April 2005. It has a Lil'Kinz version, isn't retired, and was Pet of the Month in April 2010. It was featured in the video It's Good to be the King. Its pet specific food is the Zebra Dog and its pet specific item is the King of the Jungle Throne. It has a Figurine, the Fraidy Cat Lion.

"Kings and Queens of the jungle, it goes without saying, our lions are the most regal of all Webkinz. But just because they're descended from royalty doesn't mean they can't let their manes down, curl up on a couch and munch on a Zebra Dog or two!"

The lion is another Webkinz with long hairs on its back and short smooth ones on its back. It has a mane of brown fur around its yellow head. Its body is yellow all over except for its mane and its tail (which is bushy and brown at the end). 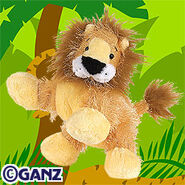 Monarch of the Beasts Throne 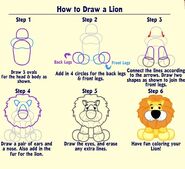 Pet of the Month Ad 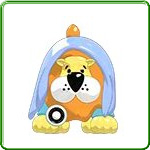 Lion makes an appearance in a calendar.
Community content is available under CC-BY-SA unless otherwise noted.
Advertisement