HM131
The Love Puppy is a seasonal Webkinz pet that was released in December 2006. It retired in March 2007. It doesn't have a Lil'Kinz version and it hasn't been Pet of the Month, although a Kinz Klip version has been released. It is the first seasonal Webkinz, with its pet specific item being the Tender Hearts Loveseat, and its pet specific food being the Sweetheart Tart.

There's a Kinz Klip version of the pet.

If you love dogs, this is the pooch for you! This is a little pup who wears its heart on its sleeve; and everywhere else, too! You can't beat this pup for loyalty; this sweet heart-spotted puppy would love nothing better than to be your very best friend! 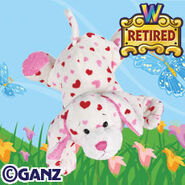 How to Draw a Love Puppy