Characters in Webkinz World who do not have enough information to warrant their own separate page.

Below are relatives of Webkinz Hosts and the 'Kinz Crew.

"Enorma is a quirky elephant with a scientific mind and a general lack of coordination. She is friends with Polly Panda, and acquaintances with the rest of the ‘Kinz Crew. Enorma likes to learn why and how things work, write in her notebook, and meet up with her good friend Hue the Zingoz for picnics. Even though she’s clumsy, she tries to be patient with herself and not lose her sense of humor."

Below are characters who are friends with Webkinz Hosts or 'Kinz Crew members.

Friends of Amanda Panda that live in the Big City, mentioned in Amanda Panda's Journey Home Chapter 2. Polly describes them as "...[not] exactly nice girls."

Alex Tiger and April Keymon's friend. She makes an appearance in Alex the Brave.

The 10 year-old friend and former classmate of Alex Tiger. She makes an appearance in Alex the Brave and is mentioned in Letters From Camp. The Kinzapedia described her as:

"April is an extremely enthusiastic young Cheeky Monkey. She’s outgoing and cheerful and loves a good adventure. She’s basically the complete opposite of her best friend, Alex Tiger. Recently, she’s moved across town, to be closer to her elderly grandmother, but she keeps in touch via email and funny notes and cards."[1]

A classmate and friend of Alex Tiger. He makes an appearance in Alex the Brave.

Matilda is a friend of Arte Fact. She is featured in Arte and the Lost Tomb.

Characters that are only featured in Arcade games.

The 67 year-old janitor featured in the Lunch Letters Arcade game. The Kinzapedia described him as:

"Billy is a good-natured goat who cleans the cafeteria in Lunch Letters. He’s got overalls, a janitor’s mop and a sense of purpose. He only gets flustered if the floor gets too covered in food."[2]

Blanche is the server in Smoothie Moves. She is a Persian Cat.

The enemy of Poncho in Candy Bash 2. Gato Loco is Spanish for "crazy cat". The Kinzapedia describes him as:

"The Gato Loco is Poncho’s arch-nemesis in Candy Bash. This crazy kitty is always trying to steal Poncho’s delicious candy!"[3]

Horace is the main character in the games Cash Cow and Cash Cow 2. He has a resemblance to Mr. Moo due to similar appearances and occupations. The Kinzapedia's description of him is:

"Horace is the cow in Cash Cow and Cash Cow 2. There's only one thing he loves – collecting milk!"[4]

Livingston is the main character in the Arcade game Bounce N Burst. He is described in the Kinzapedia as:

"Livingston is a brave adventurer who roams the jungles of Kinzville. Livingston’s entire goal in life seems to revolve around using various devices to tickle unsuspecting Burstos Zingoz. These Zingoz are glad to have him around, though – they love being tickled!"[5]

Poncho is the main character in the Arcade games Candy Bash and Candy Bash 2. The Kinzapedia describes him as:

"Poncho loves one thing and one thing only – candy! Unfortunately, that gato loco is always trying to steal it from him. Luckily, our Poncho is fast, persistent and sneaky – he usually gets his candy before the cat takes it all away. Poncho is a Chihuahua with a large sombrero. He lives somewhere in the Webkinz World desert."[6] 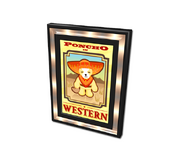 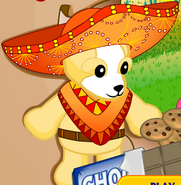 Poncho as seen in Candy Bash

Characters that only show up during holidays, such as Halloween or Christmas.

SantaKinz is a character that only appears around Christmas. His appearance is not consistent, ranging from being a Polar Bear, a Golden Retriever, and a St. Bernard. The Kinzapedia describes him as:

"SantaKinz only comes to Webkinz World at Christmas, of course. He brings toys to and good cheer to all."[7]

More information about Christmas in Webkinz World can be found on the Christmas page.

Other characters that make appearances in either W-Tales, Webkinz World, or Webkinz Newz articles.

Hue is the Zingoz guardian of the Rainbow Prisms/Gems and the last of his kind. He is featured in the story Color Catastrophe. The Kinzapedia describes him as:

"Hue guards the rainbow gems in caves near Webkinz World. He’s not a fan of Doug, who is on the search for the rainbow gems. Hue does his very best to keep the contents of the cave and the cave's location a secret. It can be lonely work being the guard Zingoz, but Hue has his best friend, Enorma, visit him frequently."[8]

The director and producer of Dacey Bryn's movies. He makes an appearance in Superstar Spring Break.

A teacher at Kinzville Academy who makes occasional appearances in W-Tales and Webkinz Newz articles. Not to be confused with Daisy Doe.