HM348
The Mocha Pup was released in August 2009. It isn't retired, wasn't Pet of the Month and doesn't have a Lil'Kinz version. Its pet specific item is the Chocolate Fountain and its pet specific food is the Coffee Bean Biscuit.

The Mocha Pup looks similar to the Tawny Pup. It has short dark brown fur on most of its body. It has tan fur on its muzzle, chest, tip of its tail and the bottom of its paws and ears. It has

This coffee-colored canine is the cuddliest pet around! Exploring different areas of Webkinz World is what the Mocha Pup likes to do best! This fun-filled, lively pooch keeps its energy levels high by snacking frequently on some Coffee Bean Biscuits!

Virtual Version of the Mocha Pup 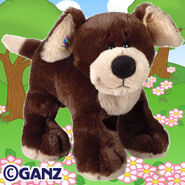 Plush Version of the Mocha Pup