HM008
The Monkey Webkinz was released in May 2005. It was retired in October 2008. There is a Lil'Kinz version and hasn't been the Pet of the Month before. Its pet specific food is the Jungle Sandwich and its pet specific item is the Monkey Business Sofa. There is a Figurine featuring the Monkey, Dr. Monkey, MD.

You'll go bananas when you adopt the monkey, but don't worry, you won't be alone! That's what the monkey does if there's a Jungle Sandwich nearby, because that's what it loves to chow down on. And where does it do its chowing down? On its very own Monkey Business Sofa, of course!

The Monkey is brown and fuzzy, its belly is tan and feet and hands. Although the tan part is not fuzzy. 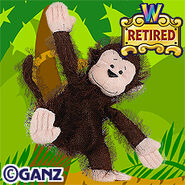 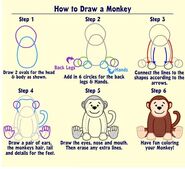