The Musical Dalmatian is a Webkinz pet that was released in May 2013. It doesn't have a Lil'Kinz version. It has not been Pet of the Month. It isn't retired. Its pet specific item is the Music Conductor's Tuxedo and its pet specific food is Orchestra Pitted Olives.

The Musical Dalmatian is white with black musical notes and symbols all over its body. The undersides of it ears are black. It has black eyes. It has a black nose. The bottoms of its paws are black. Its tail is also black.

The Musical Dalmatian will hit just the right note for any music lover! This dynamic dog always has the right composure, especially when dressed to the nines in their Music Conductor's Tuxedo! When there is only a little time to spare between concertos, sneak in a snack of some Orchestra Pitted Olives to help satisfy their cravings! 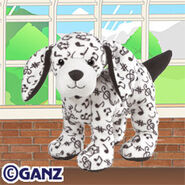