The Webkinz Pink Googles was released in June 2008. Its pet special item is the Googles Gem Garden and its pet special food is the Jumbled Googles Caboodles. It didn't retire and doesn't have a Lil'Kinz version. It was the Pet of The Month in August 2010 and it was featured in the Music Video Go Go Go Googles. 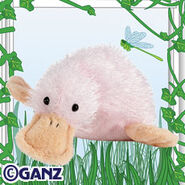 Ad
Add a photo to this gallery

Retrieved from "https://webkinz.fandom.com/wiki/Pink_Googles?oldid=40060"
Community content is available under CC-BY-SA unless otherwise noted.