The Pink Poodle has black eyes and a black nose, and pink curly fur. The fur length is varied in some areas of the pet, with shorter portions of more straight fur on their face near their eyes, on the bottom of their paws, and on the base of their tail and ears, excluding the tips. They also have a big portion of very curly fur on the top of their head. Their magic W is located on their upper left paw.

"Meet the prettiest pink pooch in Webkinz World! The pink poodle is not only stunningly stylish, but it's also the sweetest pup you'll ever meet. This perfect pet loves all things cool and chic and wants nothing more than to be your best friend!"[1] 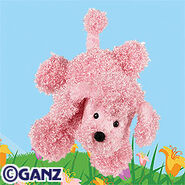 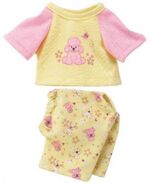 A Pink Poodle featured in the Newspaper with the Pet of the Month Medal.