The Pirate Parrot is a regular Webkinz pet that was released in July 2013. It was Pet of the Month for March 2016, and March 2018. Its pet specific food is Swordfish and Chips and its pet specific item is the Buried Treasure Beach.

"Arrrr, mateys, the Pirate Parrot is set to sail the seven seas! Be sure to ready them for the voyage with a serving of some swashbuckling Swordfish & Chips, the favorite food of any winged smuggler! And once they're off on their latest adventure, help them search for riches on their highly secret Buried Treasure Beach!"

The Pirate Parrot is dark blue with a white crossbones and pirate flag pattern. It has a white face, black feet, blue eyes and a large black-and-white beak. Its chest and tail feathers are bright red, with yellow feathers on the top of its tail. The ends of its wings are yellow and teal. 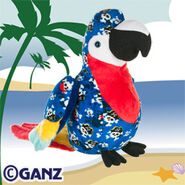