HM662
The Plumfadoodle is a Webkinz pet that was released in April 2012. It is not retired, does not have a Lil'Kinz, and hasn't been Pet of the Month. Its pet specific food is the Sour Plum Drops and its pet specific item is the Flower Patch Pond.

Oh, what to do about a Plumfadoodle? This colorful flying friend enjoys taking it easy and relaxing by their Flower Patch Pond. And despite their sweet nature, the Plumfadoodle always enjoys something sour, like their Sour Plum Drops!

It is Plum on its body and pink on its belly. Its beak is pink with a dab of black at the tip. Its two wings are pink with light pink and plum splats. It has confetti strings on the top of its head which are plum and pink. 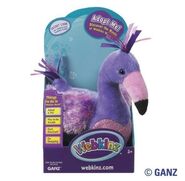 In-Box
Add a photo to this gallery
Retrieved from "https://webkinz.fandom.com/wiki/Plumfadoodle?oldid=46834"
Community content is available under CC-BY-SA unless otherwise noted.