Plumpy E. Hippo is a hippo that answers questions to Webkinz or Lil'Kinz who are wondering about a topic in "Plumpy's Advice" in the Newspaper. She gets her hair done by her room mate Wiggles. You can be her friend by writing PlumpyEHippo on your Webkinz Phone. Her birthday is September 9 and her favorite game from the Arcade is Go-Go Googles!. 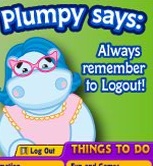 Retrieved from "https://webkinz.fandom.com/wiki/Plumpy_Hippo?oldid=36095"
Community content is available under CC-BY-SA unless otherwise noted.