Webkinz Wiki
Register
Don't have an account?
Sign In
Advertisement
in: Pet of the Month, Bears, 2006 Pets,
and 2 more

HM116
The Polar Bear is a Webkinz pet that was released in October 2006. It isn't retired, has a Lil'Kinz version, and was Pet of the Month in December 2008 and December 2010. Its pet specific food is the Frozen Iceberg Chili and its pet specific item is the Arctic Window.

This little bear loves the cold weather, ice and snow, but would definitely give it all up for a warm bed in a well-designed room! Polar bears are strong, intelligent creatures. They’re also lots of fun! To please your polar bear, pick up a big bowl of Frozen Iceberg Chili at the W Shop!

The Polar Bear is white. It has black eyes and a black nose. It has four big paws and a small stub tail. Its Lil'Kinz version looks very similar except it is smaller. 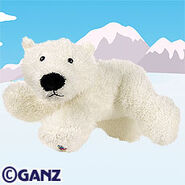 How to draw the Webkinz polar bear
Community content is available under CC-BY-SA unless otherwise noted.
Advertisement