HM014
The Poodle is a Webkinz pet that was released in January 2006. It has a Lil'Kinz version, isn't retired, and hasn't been Pet of the Month. Its pet specific item is the Pretty Poodle Vanity and its pet specific food is the Lobster Kibble Bisque.

Besides their great looks, Poodles also have great taste. That would explain the Lobster Kibble Bisque for their favorite food. Poodles are also known for their intelligence. With all the time it likes to spend in Quizzy’s Question Corner, this pup is no exception. You would be smart to pick one up.

The Poodle is a white dog, with lots of fur on its heads, tips of its ears, legs, and tail. 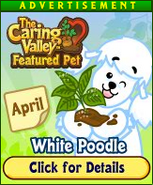