Webkinz Wiki
Register
Don't have an account?
Sign In
Advertisement
in: Pet of the Month, Dogs, Pets,
and 3 more

The Poofy Poodle is a Webkinz pet that was released in January 2013. It doesn't have a Lil'Kinz version. It was Pet of the Month in March 2015. It isn't retired. Its pet specific item is the French Chaise and its pet specific food is Sweet Fluffy Bon Bons.

The Poofy Poodle is purple. It has curly aqua fur on its chest and head. It has one purple ear and one pink ear. It has two purple ankles and two pink ankles. The tip of its tail is aqua. It has black eyes and a black nose.

Discover the meaning of true pampering with the perfectly coiffed Poofy Poodle! This luxury-loving pet loves to get hours of beauty sleep on their elegant French Chaise and simply adores delicately nibbling on some sugary Sweet Fluffy Bon Bons!

The Poshy Poodle pet looks similar to the Poofy Poodle, but with different colors. 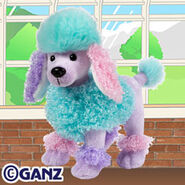 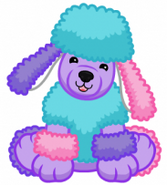 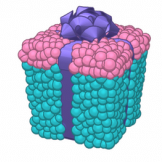