HM143
The Webkinz Raccoon is a retired pet that doesn't have a Lil'Kinz and wasn't Pet of the Month. It was released in June 2007. Its pet specific food is the Rascal's Ratatouille and its pet specific item is the Curbside Cuisine Fridge.

There is also a Figurine version, it's called the Tee Time Raccoon.

"There's no pet quite as mischievous as the rascally Raccoon! Want to make this trickster giggle? Turn on the Monkey and Monkey Show! While Raccoons LOVE to play a few pranks, they're also really awesome friends. You'll always have loads of fun with this joker around!"

The Raccoon has fluffy grey fur on most of its body. It has a black mask, claws and black rings around its tail. It has white ears, a white muzzle and patch above its eyes. The Raccoon has a big black nose and whiskers. 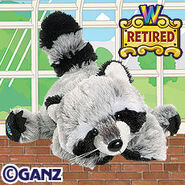