HM9048
The Rainbow Rascal is a Webkinz virtual pet that was released in May 2012. It is not retired, does not have a Lil'Kinz, and has not been Pet of the Month. Its pet specific item is the Swing in the Sky and its pet specific food is the Rainbow Snow Cone.

The pet seems to have orange and pink ears on the left side and green and blue ears on the right side, both of them have white in it. The face is purple with some white bekiw the eyebrows and above the eyes. On the face, there is a circle of white near the pink nose and pink tongue, there are also rainbow whiskers on it. The paws have claws on it, the left paw is dark pink while the right paw is yellow. The belly has red, blue, yellow, and green on it. It also has a bushy rainbow tail. While the paws are orange on the left, and blue on the right.

The only thing this colorful bandit would ever steal would be your heart! Have fun all day long watching them play on their Swing in the Sky, and when they take a break, make sure to serve them a refreshing Rainbow Snow Cone! 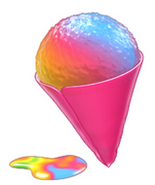 Swing in the Sky