HM9103
The Red Velvet Raccoon is a Webkinz eStore pet that was released in February 2014. It is not retired, it hasn't been Pet of the Month, and it doesn't have a Lil'Kinz. Its pet specific food is the Creamy Cocoa and its pet special item is the Luxurious Clock.

The Red velvet raccoon is velvet with red stripes on its tail and has a masked looking face. 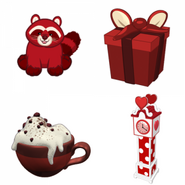 The Red Velvet Raccoon with its gift box, Creamy Cocoa, and Luxurious Clock 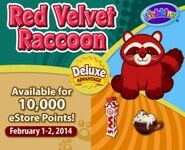